Although for some companies Robotic Process Automation (RPA) is a relatively new term, others have been using it for a while and are fairly advanced. In this article, we will look into the RPA journey of the largest container shipping company in the world - Maersk Line. We will start with the fundamentals of RPA and continue the article with the Maersk Line case study from the first steps till current solution of combining Artificial Intelligence(AI) with Robotic Process Automation (RPA) to automate purchasing function up to 75%.
Prehistory — what is RPA?
First things first, Robotic process automation (RPA) is a form of business process automation technology where software robots replicate human work functions. It is not a groundbreaking concept in itself since programmers long time ago started to develop scripts that automated some of the functions. However, they were usually single application based (meaning: functioning only on billing system or HR system or Database, etc.). Scripts were also something that only developers could develop so it was not really accessible for mere mortals.

With the introduction of Robotic Process Automation tools such as ‘UIpath’, ‘Blue Prism’, ‘Automation Anywhere’ and others, much more complex system automations and integrations became viable. RPA’s can easily switch between different enterprise applications manipulating information in the process. New tools greatly expanded capabilities, because, in a real-world work environment, there is a constant transition back and forth between a number of enterprise software solutions. Unlike custom developed scripts, RPA tools have a user-friendly interface that allows even non-technical person to start tinkering around.

RPA’s are great for processes that are clearly defined, have documented rules, and regularly repeated with a limited procedural variation. Some of the areas where RPA proved to bring value: Claims processing, Payroll processing, Call centre operations, Credentials verification, Forms processing, Customer Order Processing, Compliance reporting, Fraudulent account processing, Data cleaning, Purchasing and Procurement
Beginning of the Journey — 12% Procurement Automation with RPA
In 2016 the largest container shipping company in the world — Maersk line, changed company direction to become digital first. With a new direction in place, Procurement department started their digitalisation journey. The first step was to identify business areas, which could be a good contester for RPA implementation. Time trackers were introduced to calculate how much time each task takes and convert it into Full-Time Equivalent (FTE). FTE is a single unit that indicates the workload of an employed person and makes it comparable across various contexts

RPA automated about 5,000 tasks in 30 main processes every week which accounted for 12% of the workload of that business unit.

Purchasing unit responsible for buying supplies for ships was selected for automation. Purchasing process had a high FTE score and checked a few pre-qualification boxes. Purchasing frequency was rather high and stable. All tasks had a single overarching goal — compare suppliers with their offerings and buy goods for the best price all things considered. Also, rules were fairly simple if/then statements which are relatively easy to develop. 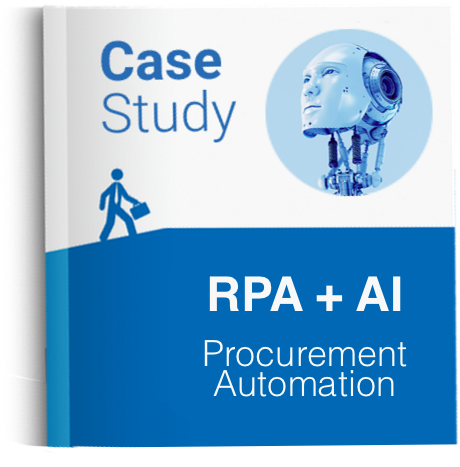 As a result, RPA called Holger was developed with the most important task to assist the purchasing team (Buyers) with managing Purchase Orders (PO) and Request for Quotes (RFQ). Holger automated about 5,000 tasks in 30 main processes every week which accounted for 12% of the workload of that business unit. Click the image to download pdf.
Continuing the journey — RPA + AI = 75% automation
Since rule-based RPA has reached its’ functional limit, Artificial intelligence (AI) modal and Machine Learning (ML) algorithm is being developed to deal with more complex situations. These additional AI based rules will be combined with RPA to extend the functionality.

Every time the algorithm selects the right supplier, then it is being ‘rewarded’ thus making reinforced learning of AI and further improving the automation accuracy. This method showed the potential to reach 75% automation level.

The external consulting firm came on board to build AI modal since available Data Science skillset was hard to be found internally. Consultants have developed the algorithm that can handle the volume of daily incoming requisitions, by collecting at least one price for each item in a requisition, then identifying the minimum cost supplier allocation and finally places the order if certain conditions are met. The latter module increased the automation level to more than 50% of the total volume.

To keep improving the automation potential, Master Thesis student from Danish Technical University (see the GDPR protected profile) came on board. The goal of a thesis project was to develop an algorithm to understand the motives behind the decisions made by experienced buyers and train Artificial Intelligence module through Machine Learning. The idea was to use the historical purchase order (PO) data to try to understand the reason why an experienced buyer selects a supplier for each item in a requisition. Every time the algorithm selects the right supplier, then it is being ‘rewarded’ thus making reinforced learning of AI and further improving the automation accuracy. This method showed the potential to reach 75% automation level.

As this project is still ongoing it is difficult to predict the exact level of automation that complete setup will reach. However, one is certain — RPA combined with AI have the potential to automate even the most complex job functions. If you are interested in Process Automation, RPA or AI implementation at your work — then let’s have a talk. Gabriele will share what other companies did that could be applicable in your situation.
This story was brought to you by Match My Thesis - we connect companies with top students for Master Thesis project collaborations. Specialising in Data, AI, RPA, IT, Business, Operations and Engineering projects, we help companies to crack their bottlenecks and innovate without investing too many resources. Book a call with our case consultant to share what you are working on and based on our previous thesis projects, we will suggest what students could do for you.


Our case consultant, Christoffer, will share previous thesis projects and suggest what could be done for you.